The calcium-aluminum silicate zoisite is capable of forming rocks, e.g. pink »Thulitite« or green »Anyolite«. The latter often bears large ruby crystals. As a whole rock it is optically confusable with green fuchsite mica, which can also contain ruby. 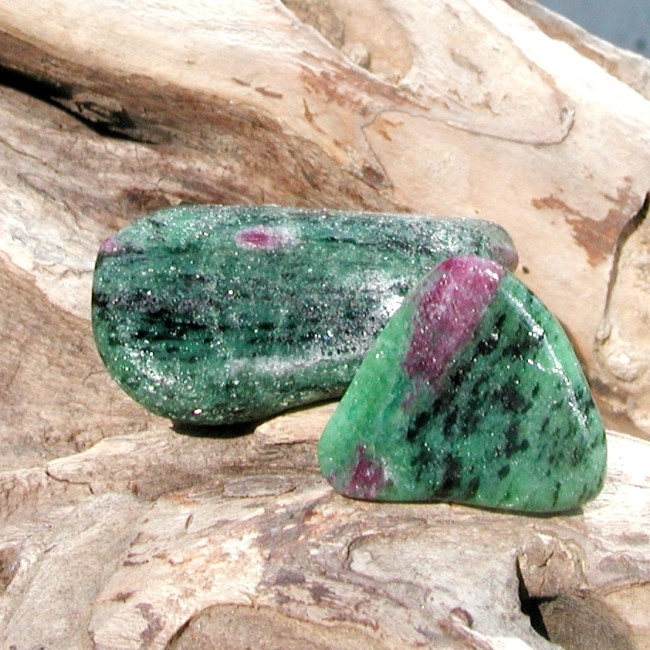 The name »Anyolite« (after the Masai word for "green") stands for a mineral mixture of rock-forming green opaque to translucent zoisite, black hornblende amphibole and opaque to translucent rubies. It is also called "ruby zoisite" according to its mineral composition. The green color is caused by the element chromium.

The rock was first discovered in 1954 at the Longido mine in Tanzania and is used primarily for craft products, cabochons and tumbled stones. 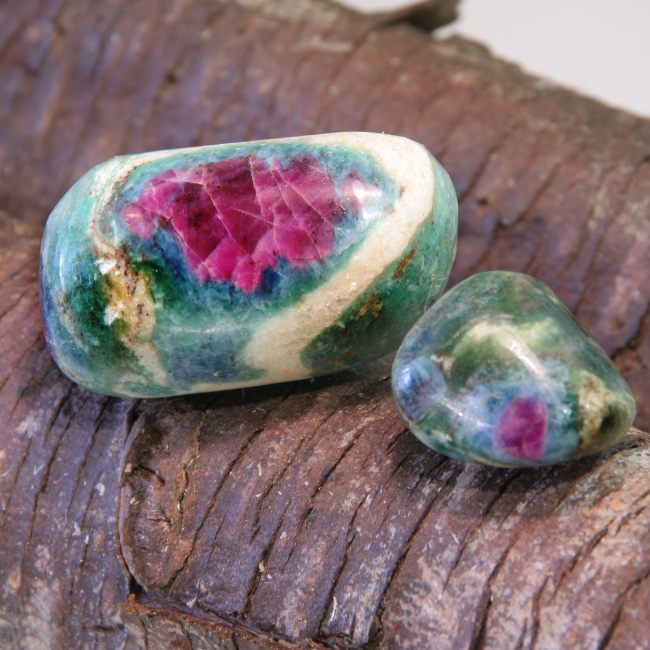 This colorful metamorphic rock consists of minerals formed at high pressure (over 5 kbar) and temperatures between 400 and 600°C.

The rock composition varies depending on the deposit. Rocks from the O'Briens Claims in Zimbabwe contain ruby and fuchsite as well as andalusite, chlorite, tourmaline and diaspore, which are missing in the rocks from the South African Mashishimala. Instead, disthene, biotite and plagioclase occur there as secondary aggregates.

From the Indian Mysore also mineral compositions are known, which contain ruby, disthene and fuchsite beside muscovite, quartz and rutile. The ruby often shows a reaction fringe of light blue disthene when in contact with the green, chromium-rich mica mineral fuchsite.

This gemrock is processed mainly for small stone engravings, cabochons and tumbled stones.

Since the minerals of which the two rocks are composed are quantitatively and spatially distributed very unevenly, they must be determined separately. The most important differences are in the green constituents.

Fuchsite is a chromium-bearing muscovite and belongs to the mica group. It is a very soft mineral (Mohs hardness: 2 - 3) with an excellent cleavability. With a knife elastic cleavage flakes can be lifted off, which glitter in the sunlight. The cleavage surfaces have a typical silky luster. The density of the ruby-fuchsite rock is 3.0 - 3.6. Diagnostic for this rock is also the possible occurrence of blue disthene, often as a fringe around the ruby.

Green zoisite (»Anyolite«) is much harder (Mohs hardness 6 - 6½) and forms a coarse-grained structure (no flakes). The fracture is uneven, with vitreous luster. The density of the »Anyolite« rock is 3.50 - 3.90. Blue disthene does not occur in this rock.