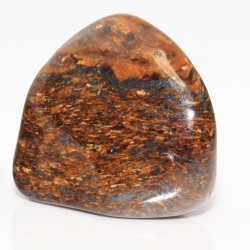 In modern mineralogy, "bronzite" is no longer regarded as a mineral in its own right, but as an iron-bearing variety of the mineral enstatite (so-called "Ferro-Enstatite", abbreviated: "Fe-Enstatite", (Mg,Fe)2[Si2O6],). Fe-Enstatite of the variety Bronzite contains 5 - 15% iron (in relation to magnesium) and belongs to the mineral group of pyroxenes. This group comprises single chain silicates with the basic component [Si2O6].

In most cases Fe-Enstatite is a rather unimpressive mineral. In its earthy, brownish to almost black colors it is neither rare nor valuable. But as soon as it appears as shiny golden flakes and bars, it attracts the interest of mineral dealers and collectors.

The golden-yellow shining "bronzite", which is available as tumbled stones, does not consist solely of the mineral Ferro-Enstatite, but also of other minerals. It is a rock in which Fe-Enstatite is the main component in company with black magnetite and colorless quartz. For this reason, the hardness of this rock varies between 5 to 6 (bronzite) and 7 (quartz). The density of the rock is about 3.2 - 3.4.

Rocks that consist almost entirely of a single mineral are usually named after this mineral or after the mineral group to which they belong. Since Fe-Enstatite belongs to the mineral group of pyroxenes, this rock is mineralogically called "Pyroxenite". In order to consider the characteristic color, the variety name can also be added as a trade name: »Bronzite-Pyroxenite« 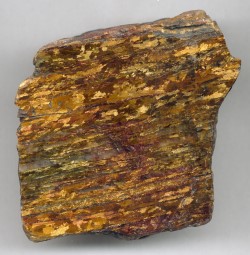 This coarse-grained rock rich in amphibole minerals with golden yellow surface luster is traded as »Golden Amphibolite«. It is found in several places on Earth. Commercially available specimens come from the USA (Wyoming, New Hampshire, Massachusetts) or from western Australia.

Similar to the commercially available »Bronzite-Pyroxenite« rock, »Golden Amphibolite« is not a single mineral, but a rock in which the individual mineral components are inhomogeneously distributed. For this reason, there may be certain differences when determining hardness or density. The hardness is about 5 to 6, the density about 2.8 - 3.0.

Visually, »Golden Amphibolite« differs considerably from normal amphibolite rock. The latter usually has a speckled appearance in black and white with a medium to coarse grained structure with frequent banding (nickname: »Salt & Pepper rock«). Its main components are plagioclase feldspar (mostly white to light grey in color) and amphibole minerals (hornblende or anthophyllite). The latter usually look black but can also range from brown to dark grey. Amphiboles in such bright golden yellow colors as seen in the »Golden Amphibolite« are rarely found.

Studies by Dietrich et al. (1988) of a »Golden Amphibolite« from Wyoming showed that the amphibol minerals have partially or completely decomposed in several stages to a mixture of goethite and opaline quartz. The mineral composition is not visible macroscopically but determinable by microscopic, radiographic and chemical examinations as conducted by Dietrich et al. It is likely that »Golden Amphibolites« from other parts of the world developed their color due to a partial decomposition as well. This process produces thin platlets and flakes of iron oxides (Goethite) that are responsible for the conspicuous iridescent golden luster.

»Golden Amphibolite« is created by nature through the metamorphic transformation of magmatic gabbro or volcanic basalt (ortho-amphibolite) at temperatures between 500° - 700° Celsius and a pressure of 5 - 10 kilobar (which corresponds to a depth of about 15 to 30 kilometers). Such conditions prevail in orogenesis processes during regional metamorphism.

Differentiation of the two rocks 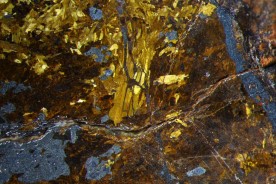 The grey inclusions of magnetite in »Bronzite-Pyroxenite« are important for diagnosis.

Both rocks look very similar. »Golden Amphibolite« shows rather elongated golden yellow bands and »Bronzite-Pyroxenite« rather short prismatic leaves. This optical distinction becomes clearly visible when specimens of both rocks are lying next side by side.

Their different mineral composition offers a much better possibility of differentiation. The Bronzite bearing rock is hosting small grains of magnetite. Due to these inclusions of magnetite, »Bronzite-Pyroxenite« is magnetic and »Golden Amphibolite« is not. A simple check whether the rock is magnetic or not, helps to distinguish these two rocks.