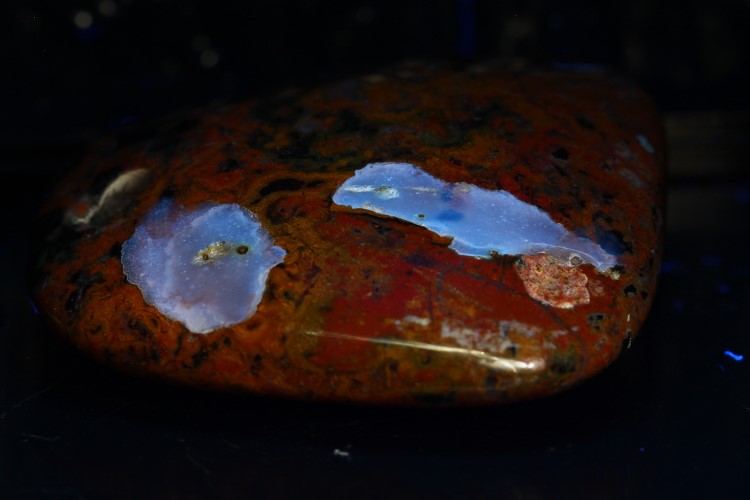 Colorless filler in a tumbled jasper under UV light

Fissure fillings are artifial enhancements to improve the transparency or processing of precious stones,  gemstones and  ornamental stones. The use of artificial filling substances in and on these stones is becoming more and more common and has reached a dimension that does not stop at any type of stone.

Fissures often occur during formation of a stone. Minerals as emerald, ruby and sapphire, which grow under high pressure and/or temperature, are generally affected. Modern mining methods based on heavy equipment and the use of explosives, do the rest.

Air and mineral impurities in open cracks and fissures affect the transparency and luster of these stones significantly. If these impurities are replaced by colorless substances that have a similar light refraction as the stone, the cracks become almost invisible to the naked eye. Better transparency allows the light to penetrate deeper into the stone. The path of an incident beam of light before leaving the stone is longer, The result is a more intensive color. Cracks and breakouts disturb the uninhibited path of the light. The light is deflected (scattered) in all directions, creating the impression of a paler color.

The use of fissure filling substances has become a standard procedur for emerald, but is also very common for aquamarine, quartz, ruby and sapphire. The treatment is done in four steps.

First the stones must be cleaned thoroughly. Especially the cracks should be free of all impurities. This is achieved by using solvents such as acetone, alcohol or trichloromethane (trade names: "Attack", "Tri"). More tenacious impurities can be dissolved with oxalic acid, with concentrated hydrochloric acid or with the strongest known acid "Aqua Regia" a mixture of nitric acid and hydrochloric acid. After such an acid treatment the stones must be neutralized to avoid gradual changes in its color as well as skin damage of the customers.

Cleaned stones are ready to be embedded in the desired oils or resins and warmed up. The thermal expansion of the stone allows air in the cracks to escape to some extend. When cooling down the filling agent replaces the removed air and penetrates into the cracks. Better results are achieved with a vacuum pump, which is able to extract considerably more air out of the fissures. During this process the stone is immersed in the oil or resin while still in a vacuum. When the normal air pressure is restored, the oil/resin is pressed into the cracks. The process is completed after the final cleaning and polishing of the stones.

The range of natural resins and oils used for these treatment extends from Cedar Wood Oil to Canada Balm and vegetable oils of various origins. Oils are relatively easy to dissolve, but also quicker in drying out. Natural resins are somewhat more resistant in drying out, however, over the years they tend to lose volume. Due to this shrinkage the hidden fissures gradually become visible again.

Cedar Wood Oil is one of the most common substances for treating emeralds. Unfortunately, it decomposes relatively quickly under UV light, releasing oxygen. In extreme cases this can cause the color of the stone to fade. This process starts once the stone is worn in sunlight or is presented in sunlit displays.

Canada balsam (Abies balsamea) is extracted from the North American balsam spruce. It is not only a very popular substances of concealing fissures in gemstones, but also known by geoscientists as an adhesive in the manufacturing of thin sections. It is more viscous than cedar wood oil and often diluted with toluol to allow for a deeper penetration into the fissures. Additives (antioxidant agents) are used to slow down the natural decomposition process. Nevertheless, over time the resin will become yellow and change the overall color of the stone.

Oil and wax not only serve as crack fillers to increase transparency. Opaque stones are also oiled or waxed to intensify the color and increase the luster. This follows the same principle as a wet stone that is more intensive in color than a dry one. 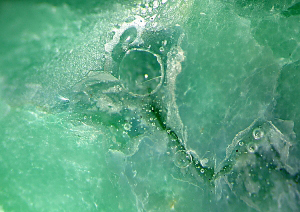 At the beginning of the 1980s, one believed that the disadvantages of natural resins could be overcome by replacing them with synthetic resins.

In addition to fillers and adhesives that cure with UV light, especially epoxy resins are used, which are the components of two-component adhesives. They are widely used under the trade names Opticon, Palm Oil, Araldite or Gemtrat.

However, mixing both components (which would create additional adhesive power) proved to be unadvisable for gemstones. The hardener starts to decompose after only one year and turns yellow. What's more, it foams in vacuum, which inhibits an even crack filling. Hence, usually only one component is used, which adheres to the crack as a viscous resin. Optionally, the hardener can be rubbed on the stone, which causes the adhesive to harden on the surface.

The visual effect of fillings with synthetic resins is the same as with natural resins. But the high flying hopes of an unlimited durability have been disappointed. Today we know that synthetic resins decompose slowly. Opticon, the most commonly used epoxy resin, becomes yellowish over the years. Palm oil (a synthetic derivative of epoxy 828 or 6010) becomes milky and cloudy over time.

Therefore, with emeralds the signs of the times point back to the roots: oil is back in fashion.

Treatment with colorless oils or resins does not have to be declared. However, if synthetic resins have been used, the stone must be described as "treated". In the USA some of the treatments are encoded with letters (e.g., O = oiled; E = enhanced; the latter means nothing else than treated with synthetic resin).

Treatment with oil or synthetic resin will hide the cracks for a while, but it will not remove them. The danger remains that the treated stone will break (e.g., when being set) because it is basically in a dilapidated state. Furthermore, the achieved condition does not last for long. 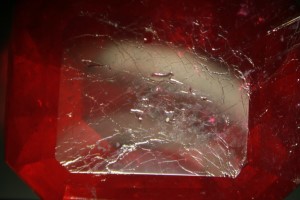 There are hopes that these disadvantages are remedied by a special technique which allows open cracks and breakouts in the faceted stone to be filled with glass. However, this glass is not window glass but a solidified melt of substances used in the synthetic production of gemstones. The properties of certain fluxing agents such as lithium molybdate and cryolite are used to slightly etch the gemstone substance. During the solidification of the melt, the dissolved gemstone material combines with the flux to form a glass and/or crystallizes again as synthetic stone.

Because of this synthetic content, some gemologists put this kind of treatment on a par with gemstones with synthetic coatings.