Compared to the widespread, well-crystallized, transparent representatives of its kind, coarse fluorite is a little noticed mineral. Its relatively inconspicuous and "atypical" appearance, often leads to confusion with other minerals.

Many of these derby fluorites are very hydrous and are therefore called Hydro-Fluorite. (Hydro-) Fluorite (CaF2 x H2O) has a hardness of 4 on the Mohs scale and a density of 3.1 - 3.3. The most common variety commes in purple color.

Hydrofluorite as imitation for »Lavender Jade« 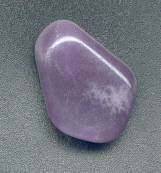 Unlike true purple» lavender jade«, which consists of either jadeite or the jadeite-bearing purple Meta-Granitoide rock from Turkey, the purple variety of Hydro-Fluorite has a fibrous structure.

In addition, it has a much lower Mohs hardness (H: 4) compared to jadeite (H: 6). Fluorite can be scratched easily with a stainless steel knife. Jadeite, on the other hand, cannot be scratched with such a knife. 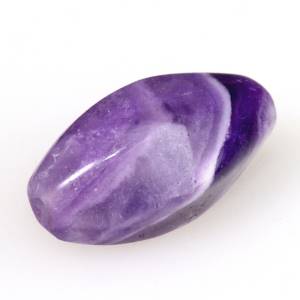 A distinction is possible on the basis of the lower density of quartz (only 2.65 - 2.68) and the greater hardness of 7, which allows to scratch glass. With a fluorite this will not be possible.
With rough pieces, the plain fracture of fluorite can also be used for separation, since quartz always breaks conchoidally. 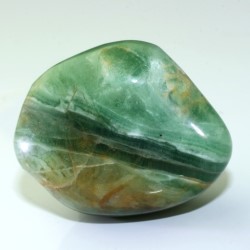 Green, translucent (hydro-) fluorite can resemble varieties of chalcedony, called »chrysoprase«, chrome chalcedony and »prasem«. All three can be distinguished by their higher Mohs hardness (H: 7) from fluorite (H: 4).
Some time ago a green rock was submitted to the EPI laboratory with the name given as "fluorine chrysoprase". According to mineralogical nomenclature rules, "fluorine chrysoprase" should be a variety of chalcedony containing the elements nickel (the coloring element of chrysoprase) and fluorine.

The microscopic examination revealed, that the specimens did not show the expected fibrous structure of a chalcedony, but a rather granular composition. Well recognizable cleavage cracks indicated a very good cleavability. Also the high density of 2.9 - 3.1 did not match with chrysoprase, whose density is 2.6 - 2.7. On a polished surface a refractive index of 1.45 could be determined, a value which does not point out chalcedony, but rather fluorite.

To determine the exact mineral composition and elemental content, a mineralogical thin section was made and X-ray fluorescence analysis (XRF) were performed. The thin section analysis clearly showed that in addition to fluorite and the remains of decomposed feldspars, only coarsely crystallized quartz - but no chalcedony - is present. The trace element analysis (XRF) showed no measurable content of nickel.

After these analysis results we knew, that we have analyzed an interesting example of a (Hydro-) Fluorite.

Fluorite is relatively easy to distinguish from "jade", quartz or chalcedony when in doubt due to its low hardness. A simple scratch test with a knife leaves a deep notch on a fluorite. Representatives of the quartz family, on the other hand, remain intact in this test.