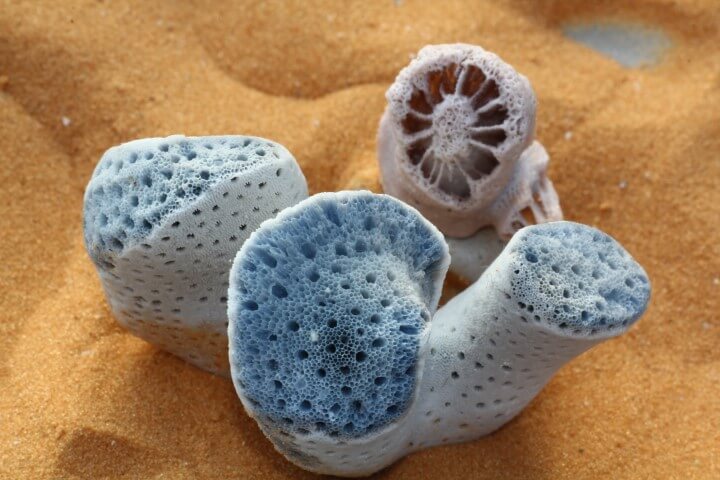 natural blue corals are a rarity even at healthy coral reefs

Coral is the term used to describe the inner framework of skeleton-forming cnidarians (coral polyps), which belong to the zoological phylum Cnidaria. Their skeletons have calcareous or horn like composition. Sometimes the composition can also alternate (bamboo corals: calcareous/horn like). Most coral species are stone corals, whose skeletons consist of microcrystalline calcium carbonate.

Mediterranean corals (Corallium rubrum) originate not only from the Mediterranean area but also from the Atlantic coast. They are divided into the groups sardegna (dark red) and sciacca (light red to orange). The deposits of »Sciacca Coral« were discovered off the coast of Sciacca, Italy between 1875 and 1880. They triggered an veritable coral boom. The coral reefs were commercially exploited until about 1915, when the deposits were completely depleted. Today sciacca has become a color designation and no longer refers to the original location. 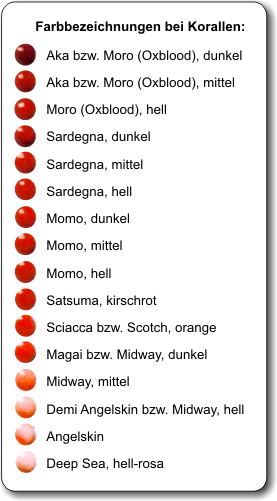 »South Sea Corals« come mainly from Japan (»Aka Coral«, Corallium japonicum), from the Midway Atoll in the Pacific Ocean (»Midway coral«, Corallium secundum) or from the waters off Taiwan (»Momo coral«, Corallium elatius). As with »Sciacca Coral«, the name of the original locations have mutated into color designations (see color range Fig. 1). Corallium konjoi is known as a white coral. It originates from the Western Pacific and is found from the Philippines via Japan to the Chinese Hainan Islands. Since 2009 these four Corallium species are part of the Washington Convention on International Trade in Endangered Species of Wild Fauna and Flora (CITES) and may no longer be traded without import documents.

Parts of the coral stock that constitute the transition from the coral foot to the solid part of the coral stock are traded as »Foam Coral«. They occur in two versions: the more homogeneous, large-pored variant originates from the now protected Corallium Elatius (»Sponga Coral«, »Momo Coral«). The second variant with smaller pores and an uneven color distribution is the coral species Melithaea ochracea, which is not yet protected. Its natural color is often white to dirty gray-brown, which is why it is usually colored. In ordhttps://www.epigem.de/administrator/index.php?option=com_content&view=article&layout=edit&id=319#er to achieve a more beautiful surface luster and more radiant colors a stabilization with synthetic resin is common.

Blue corals exist in two fundamentally different species. The Akori coral (Allopara subirolcea) belongs to the horn corals and is barely represented on the market. What is occasionally offered as blue coral are stone corals of the species Heliopora coerulea, which is protected since the millenium. These corals are dyed and stabilized with synthetic resin very frequently.

This golden yellow coral species from the Pacific Ocean (Hawaii, Tasmania, the Philippines) belongs to the genera Parazoaanthus and Cirrhiptes. They are often imitated by black horn corals bleached with hydrogen peroxide.

Black corals consist of amorphous organic matter. There are about 150 different species, but only the Akabar, the black king coral (Antipatharia spiralis) is commercialized. This species is a protected species.

»Apple Coral« and »Bamboo Coral« are trade names for stone corals of the family Gorgonaria, which are generally dyed.

For processing the living corals are immersed in hot acid to separate the fleshy polyps from their skeleton. This gives the coral its silky luster. The color of red corals can sometimes fade.

All coral species can be bleached, colored and/or stabilized due to their porosity. »Foam Corals«, »Bamboo Corals« and »Blue Corals« are atifically dyed in general. Typical are a spotted color distribution and dye concentrations in fissures.

The most common coral imitation is a pressed product made of calcite, plastic and dye, which is widely used especially for cheap fashion jewellery. Glass imitations are also quite convincing in their external appearance and can only be distinguished from genuine coral by their physical data. Black corals are often imitated by plastic replicas. »Petoskey Stone« must not be counted to the normal corals. It is a fossil coral limestone, which is also traded under the name »Petrified Coral«. 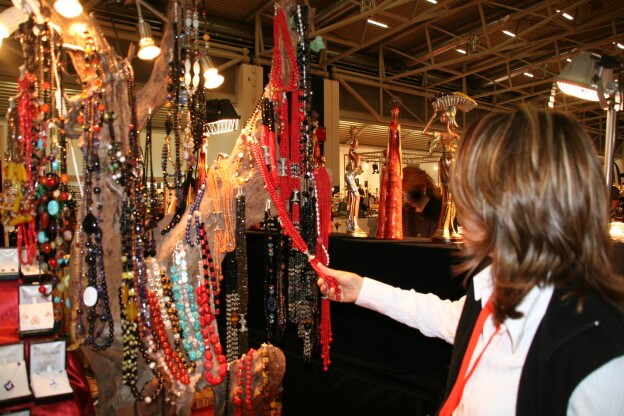