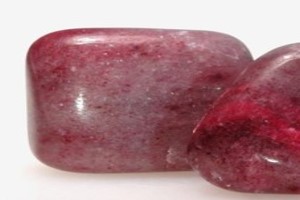 The best known deposit of »Thulite«, the pink variety of the mineral Zoisite, lies in Norway in the region of Lom. Lom is also the location of piemontite-quartzite which looks very similar to »Thulite« and can easily be mistaken for it.

The deposit is located in a zone of gneisses of sedimentary origin (paragneisses) of the so-called "Western Gneiss Region", in which numerous inhomogeneities such as quartz lenses and amphibolites occur. Embedded in this is a layer of about 3 x 250 m of manganese-rich minerals such as piemontite and thulite, with varying proportions of quartz, muscovite mica, tremolite and calcite.

As mining has reached the margins of the deposit, rocks with high content of quartz, piemontite and muscovite are increasingly coming into the trade.

Through X-ray spectroscopy we discovered that most of the rocks sold as »Thulite« were a rock with varying contents of zoisite, piemontite, quartz, muscovite mica, tremolite and calcite. In some of the samples the amount of »Thulite« was close to zero. This samples contained almost exclusively piemontite.

In the samples dominated by piemontite, the amount of quartz was so hight they should be called Piemontite-Quartzite.

Quartzite is a fine- to medium-grained metamorphic rock consisting of little interlocked quartz grains. It forms under high pressure from quartz-rich sediments by recrystallization. The interlocked structure and the high quartz content of over 98% make the rock very resistant to environmental influences.

In piemontite quartzite, the mineral piemontite is intercalated with light mica (muscovite) in the spaces between the quartz grains.

It is noticeable that with increasing piedmontite content, the content of muscovite mica also increases, which can lead to a distinct aventurization ("glitter effect"). Therefore, piedmontite quartzite is also marketed as "red aventurine quartz".