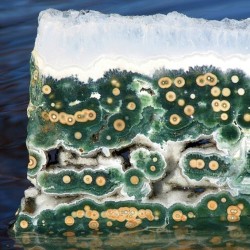 Round structures called spherulites are the typical attribute of »Oceanchalcedony«. If they are not present »Ocean chalcedony« can not be recognized as such 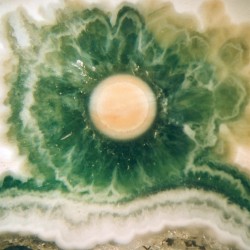 »Ocean chalcedony« has been known in Europe for a couple of years now. Sometimes the stone is eye-catchingly colorful. It originates in the Mahajanga Basin at the northwest coast of Madagascar. In the Cretaceous period (65 - 130 million years ago) this basin was still a shallow sea basin. About 100 million years ago a tectonic uplift combined with volcanic activities lead to the penetration of hydrothermal liquids rich in quartz into the calcareous and clay sediments. This led to the crystallisation of chalcedony in form of layers and veins.

The primary deposits close to the coast are largely depleted by now. Alternative material from the vicinity usually doesn't have the typical characteristics of »Ocean chalcedony« but contains more jasper and country rock.

The trade name for this variety of chalcedony has changed frequently in the past. Initially the material was offered as "Ocean jasper". This name is still in use in anglophone regions, but it is deprecated. Who ever examines the stone with the loupe, will recognize agate-like structures. In Europe the material was therefore marketed as »Ocean Agate«.

Dr. W. Lieber from Germany microscopically analyzed the stone by means of thin sections. He discovered that the material consists completely of chalcedony that has partially crystallized into radiating, spherulitic structures. Since such structures are called "Spherulites" in mineralogy Lieber named the material »spherulitic chalcedony«.

These round or radiating structures constitute the decisive feature of this kind of chalcedony. They are often embedded into a diversified structured matrix.

Once the mineralogical composition was clarified the trade name »Ocean Chalcedony« became more and more popular. The name »Ocean Agate« can still be used as there are areas with agate every now and then between the spherulitic structures. The name "Ocean Jasper", however, should be avoided. This gemrock does not have a lot in common with jasper. The most accurate way to reference this material is the description »Ocean chalcedony (Ocean agate)«.

For the recognition of a chalcedony as »Ocean Chalcedony (Ocean Agate)« it is essential, that the typical spherulitic structures are clearly present. Only material with spherulites should be labeled »Ocean chalcedony«.