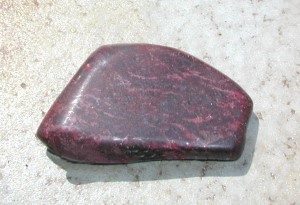 The mercury (II) sulfide cinnabarite (cinnabar, HgS) is the most common mercury compound on the market. Cinnabarite in its pure, fresh form is insoluble in water and unproblematic as long as it is a well crystallized, compact crystal. The situation changes rapidly, when Cinnabarits decomposes to dust. This dust can even be absorbed through the skin and is very toxic if swallowed or inhaled.

The mineral is usually offered in the form of cinnabar quartz or cinnabar opal. Firmly bound in quartz or opal cinnabar is harmless. Only in places where it emerges at the surface a decomposition reaction can take place and elemental mercury can arise. 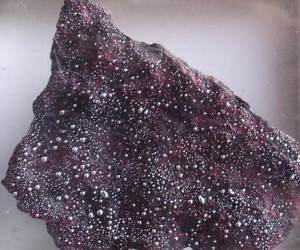 Cinnabar decomposes to elemental mercury when exposed to light. Tiny droplets of mercury may be present mineral specimens, emitting highly toxic mercury vapors. When absorbed via the digestive tract, the liquid metal is not dangerous. Already at room temperature it tends to evaporate and inhaled vapors are highly toxic. They cause nausea, vomiting, abdominal pain, bloody diarrhea and the loosening of teeth. The unnoticed danger consists in the accumulation of mercury in fat cells, tissue and organs. Even small amounts seem to have effects on the embryonic development and chronic effects on the nervous system have been proven.

When handling the described mercury minerals rubber gloves should be worn. Eating, drinking and smoking should be avoided. The minerals should always be stored in airtight plastic containers and out of reach of children.

All mercury compounds are also very toxic to fish and other aquatic organisms. They are classified as dangerous to the environment. Therefore, release into the environment must be avoided. Minerals containing mercury must be disposed of as hazardous waste.